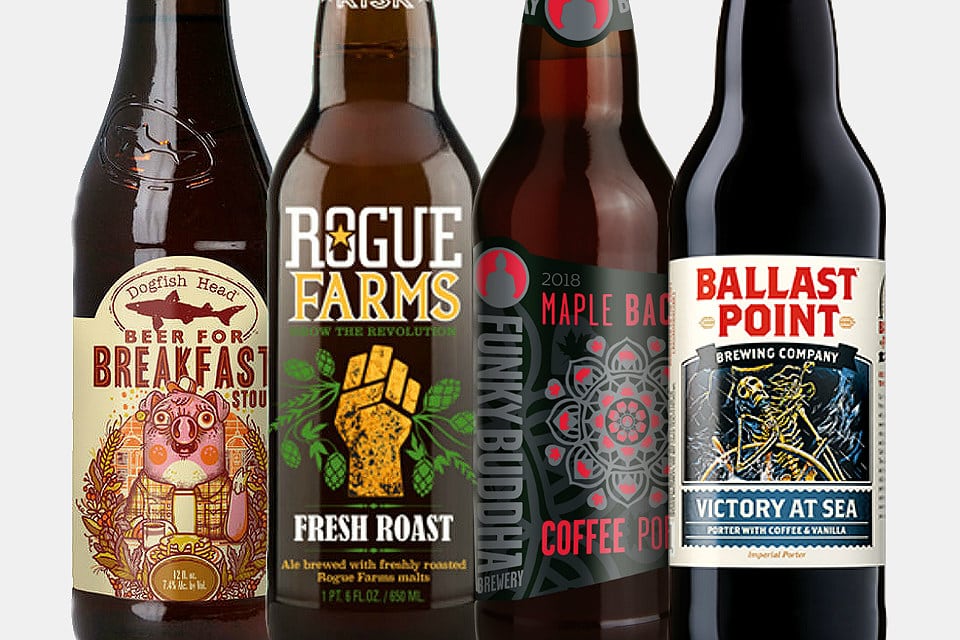 Coffee and beer: staple foods. If either of them disappeared tomorrow, it wouldn’t be safe to go outside until some desperate genius invented two more equally beautiful vices. Even then, there’d be a hole in our hearts, an eternal absence.

Luckily for us, though, there’s no law against enjoying either… simultaneously. And while you probably shouldn’t beer-up your coffee, plenty of us are happy to coffee-up our beer. But with countless breweries churning out kegs of java-inspired coffee beers, who’s to know the studs from the duds?

We’ve got your back. By sacrificing our livers and committing to jittery hands for the next week-or-so, we’ve sipped and studied 20 of the best, most iconic coffee beers this beautiful nation has to offer. So kick back, read up and sink into the dark, malty oblivion of this winning combination. Here are the 20 best coffee beers America has to offer. 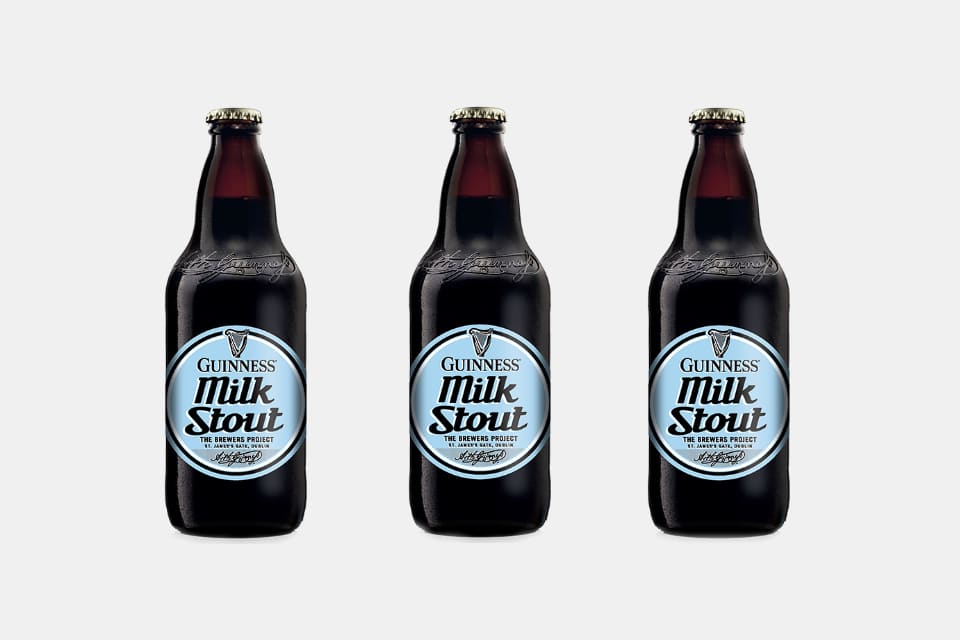 From the company that originally brought canned nitro beer mainstream, Guinness’s Milk Stout is a subtle iteration of its world-famous brother. The addition of lactose sugar (hence it’s milky moniker) endows it with a smidge more complexity and a higher ABV (5%), yet it retains Guinness’s signature thin, but subtle mouthfeel. A prominent English malt forward is unmistakable with a roasted/charr finish. The standalone standard for traditional dark nitro beers now has some backup. – Learn More 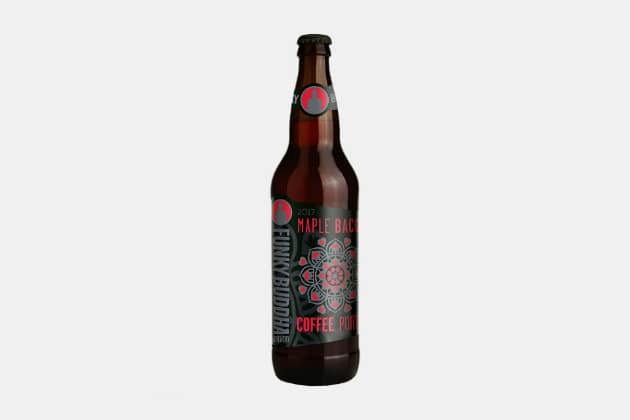 With a sock-you-in-the-face mouthfeel and a huge aroma of maple sweetness, this is a big coffee beer. Since it comes from the good people at Funky Buddha Brewery, it’s no surprise that this ranks as one of the sweeter stouts on this list, though a higher carbonation point than most sweet stouts helps to cut a bit of the direct sugar shock. For those wary by the seeing “bacon” in the name, be aware that the smoky flavors take a backseat to the prominent maple aftertaste. – Learn More 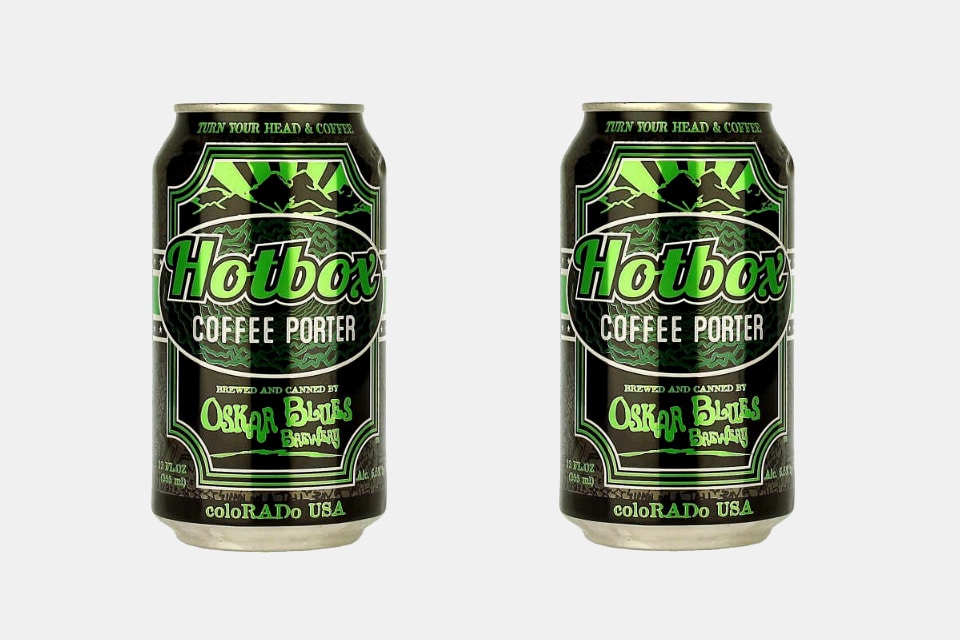 A newer beer from an old standby. Oskar Blues really hit it out of the park on this one. With great carbonation and an emphasis on the malt profile, it boasts that timeless porter taste. The coffee notes are less pronounced than some of the other beers on this list, but its distinctly bitter finish recollects a strong black cup of joe. Its nose of toasted chocolate & English malt suit the style perfectly. – Learn More 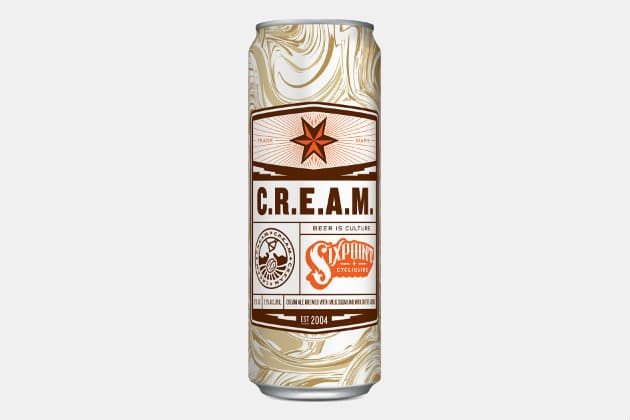 As a not-so-subtle homage to fellow New Yorkers the Wu Tang Clan, Sixpoint’s C.R.E.A.M. is as memorable as the Clan’s 36 Chambers. Notable on this list as being one of the only coffee beers to boast a warm orange color, it’s also been imbued with orange essence. Its tangy citrus tones pair nicely with its distinctive coffee nose and bitter aftertaste. – Learn More 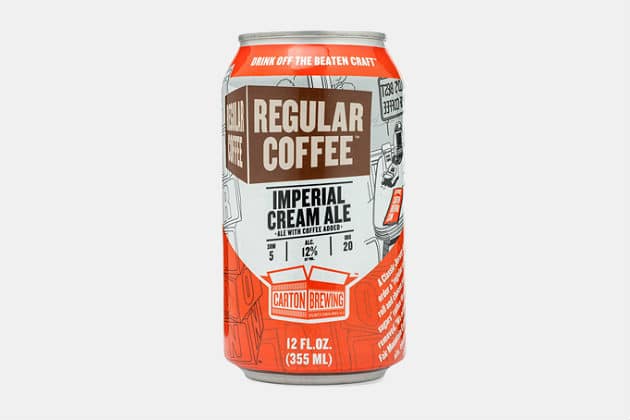 The Jersey Boys at Carton Brewing have created a monster: probably one of the most identifiably java-flavored beers out there. “Regular Coffee” is Jersey-speak for a cup of drip coffee with milk and two sugars, and despite its golden color, this beer is just that. At a fairly massive 12% ABV and with a deep nose of coffee and hints of vanilla, this creamy concoction is exactly what it purports to be: a cup of joe born in a beer’s body. – Learn More 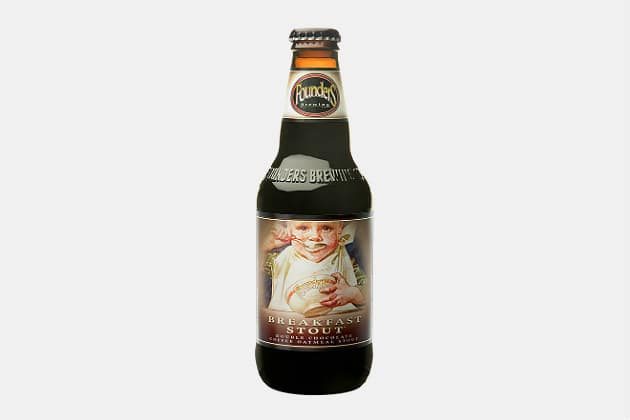 Similar to Hotbox in that it recalls roasted black coffee, but more forward with a distinctly coffee aroma. Although not as highly sought after as its bourbon barrel-aged cousin, Kentucky Breakfast Stout, it is much more readily available. With no real sweetness on the nose or flavor profile, but a crisp mouthfeel and a long, bitter coffee finish, it’s one of the go-to breakfast brews on brunch menus nation wide. – Learn More 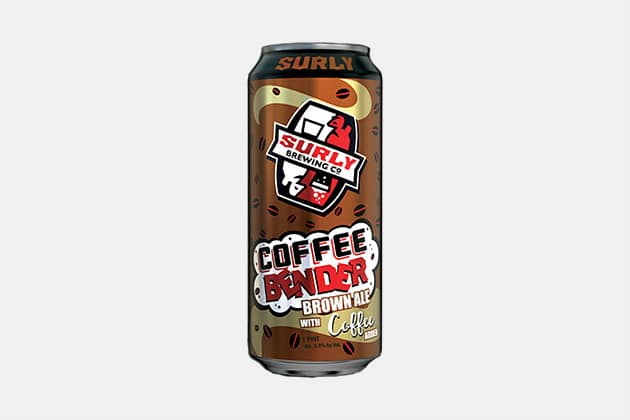 Another libation on this list for those who prefer a cup of joe over a glass of beer. With a massive aroma of pure coffee and a deep walnut hue, this brown ale shows little in the way of traditional beer. Its combination of a dense, but disappearing head; mild carbonation and fairly low (5.5%) ABV, makes this one you can knock down all night… if you’re prepared to be up until daybreak. Brewed with a generous dose of house-roasted Guatemalan coffee, Coffee Bender seriously straddles the line between coffee and beer. – Learn More 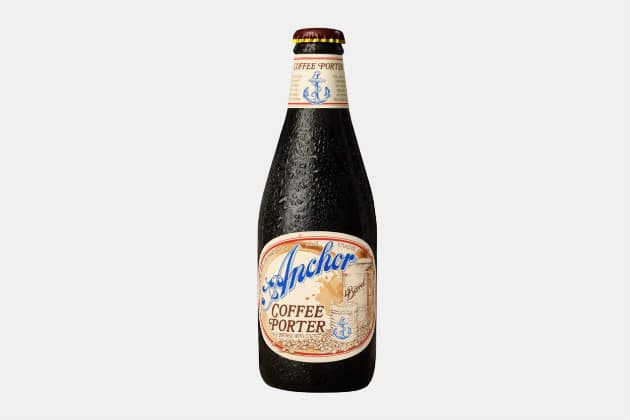 If you’re already familiar with Anchor’s Porter, then you’re already halfway familiar with this beer. Their Coffee Porter is a simple mixture of the deep, dark, malty San Francisco standby and local roaster Four Barrel’s unique flash-chilled brew. The result is a beer with all the richness of a traditional porter and all the subtleties of a craft cup of coffee. Medium bodied, highly aromatic (malt, brown sugar, cigarillo) and probably as close to cold brew as a beer can come. – Learn More 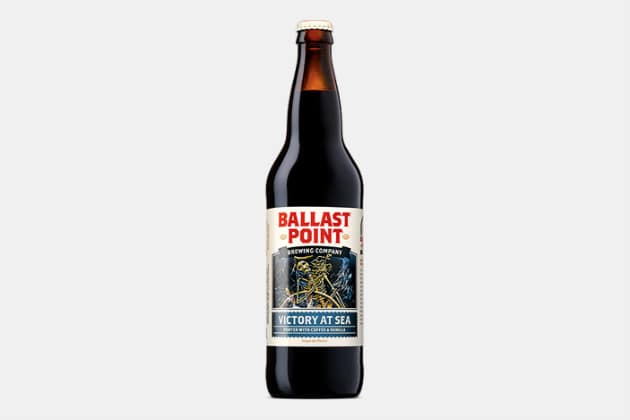 Ballast Point’s popularity has exploded, and for good reason. With exceptional staples like Victory at Sea, a 10% ABV, perfectly balanced powerhouse, they’ve earned their reputation as one of the West Coast’s premier breweries. Variants of Victory as Sea are released every year in limited quantities, making for a drink-it-if-you-find-it cult following, but the standard product is famous for its round coffee notes and sweet, syrupy finish. Big coffee profile, hints of chocolate and infinite pleasure. – Learn More 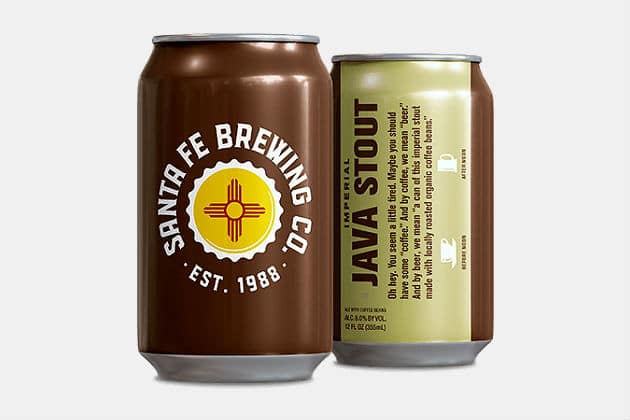 Sporting a pitch black body and tantalizing caramel head, this is seduction in a glass. But beware! For those already on the fence about stouts, this imperial is a heavyweight. At 8% ABV, it’s a thick, round (but smooth), complex brew with obvious coffee tones throughout. It’s got a huge nose of sweet coffee, chocolate and cream and has a reputation as being one of the most coffee-infused stouts out there. – Learn More 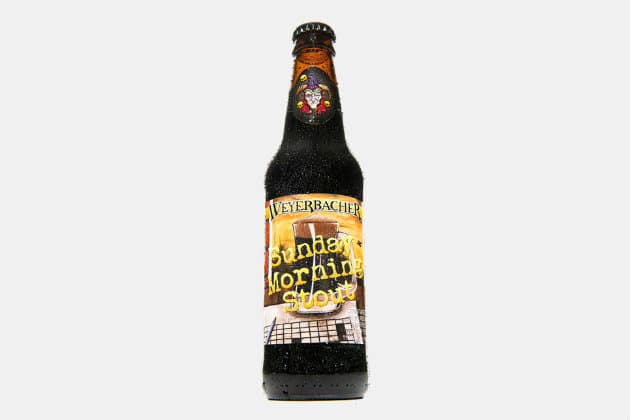 If Santa Fe Brewing’s Imperial Java Stout is too much for you to handle, you’d better skip this one altogether. Weyerbacher’s bourbon barrel aged Sunday Morning Stout is basically twice the beer. At an alarming 12.7% ABV, it’s booze forward and more reminiscent of espresso than coffee. But while its flavor profile is strong in all directions, there’s an unmistakable balance present. It’s a great beer for those who have the cojones to pop the cap. – Learn More 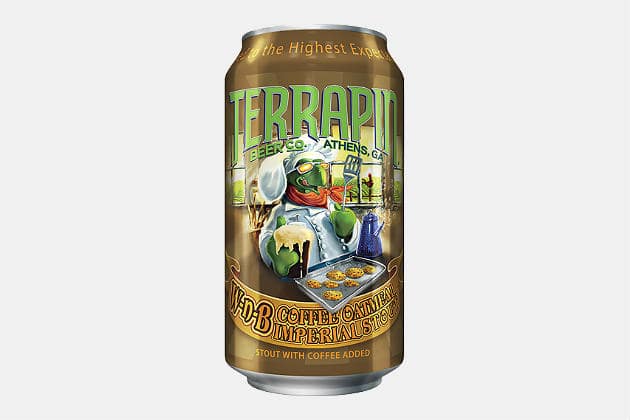 Wake-N-Bake’s obvious and constant oatmeal presence makes it an unmistakably big-bodied beer. With a sweet aroma leading to a semi-sweet and roasty coffee finish, this might be the perfect mate to your weekend breakfast… though you might note the ABV (9.5%) if you’ve got anything important on the docket. Brewed with actual small-batch coffee from their neighbors at Jittery Joe’s, Terrapin has enjoyed nationwide acclaim with this brew. Amazing flavor profile from chocolate malt to rich coffee and oats goodness. – Learn More 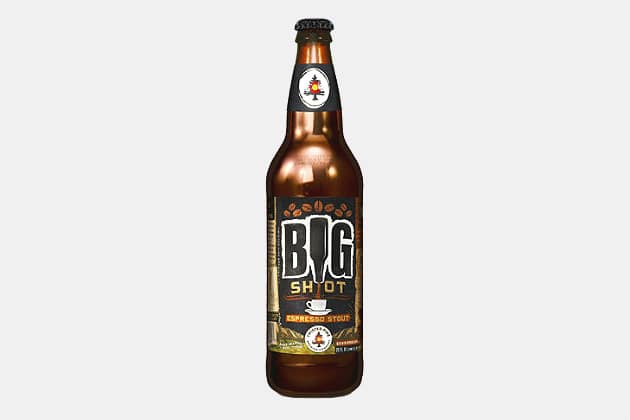 A beer as big-bodied as this usually comes with a higher gravity, but at a relatively mild 6% ABV, this is one you could conceivably knock back in pairs. With a huge nose of malty chocolate, bitter espresso back end and dominant head, it’s a fun, delicious brew that’s made a lot of friends over years. It even earned a gold medal at the 2014 World Beer Cup in the coffee beer category. If you’re new to Twisted Pine, this is a great place to start. – Learn More 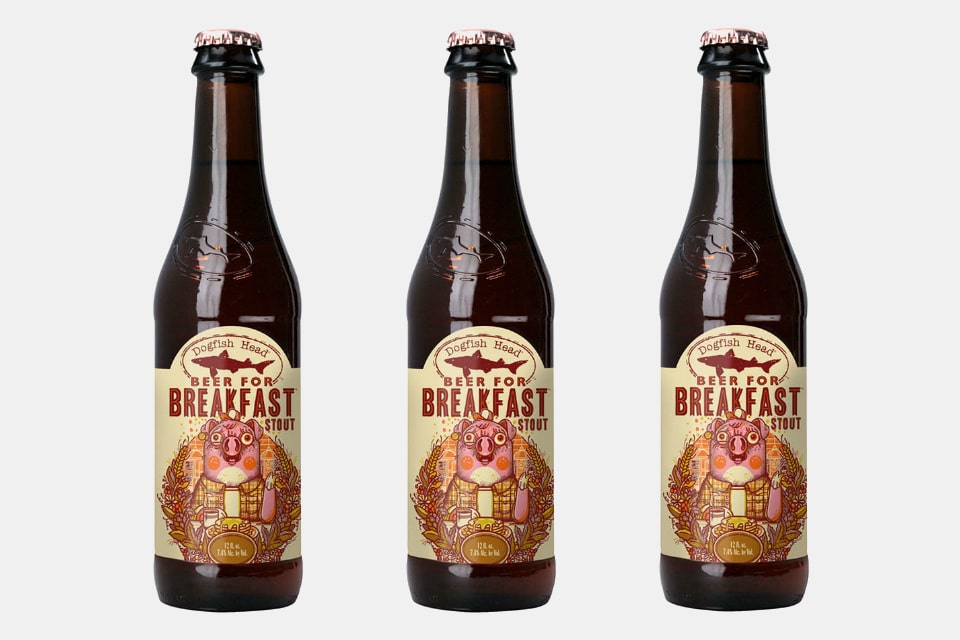 To the unobservant eye, this beer looks black as night, but held up to the light you notice the subtle, slightly translucent brown that it actually is. Although released in this format in 2014, Beer for Breakfast’s first iteration was born more than 25 years ago. It’s current, suped-up version includes Massachusetts-harvested maple syrup, Guatemalan cold-pressed coffee and a proprietary blend of spices, making for a complex, yet balanced addition to any good brunch. – Learn More 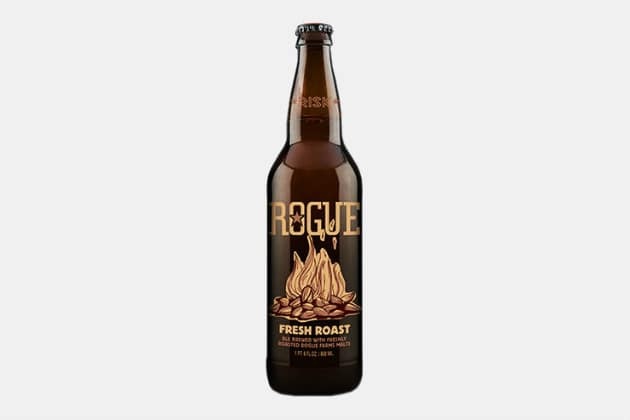 Rogue’s Fresh Roast is one for those who can do without the extra caffeine. While it’s usually associated with coffee beers, the roasted, chocolaty, malty flavor comes entirely from their unique process of hand-roasting barely. And while there’s no actually coffee brewed into the beverage, you’ll find clear java hints in both the nose and body. With a low gravity (5.7 ABV) and a deep midnight color, it’s often referred to as a stout, but Rogue insists that it’s a brown ale. – Learn More 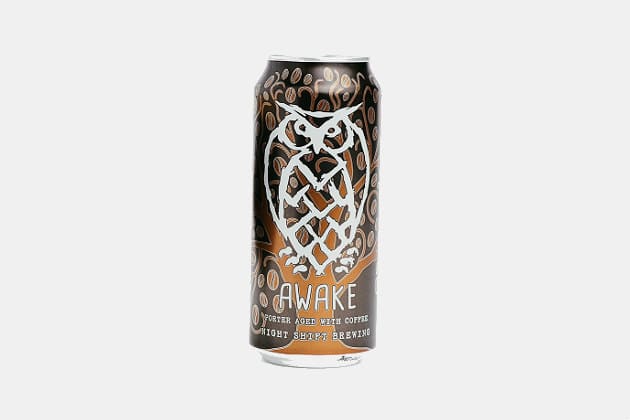 As one of the most highly-rated beers on this list, Night Shift Brewing’s Awake is a force to be reckoned with. It’s a beautiful example of an American porter brewed with whole coffee beans, donning a distinct nutty aroma, slightly higher carbonation than you’d expect from a porter (thus a more robust head), and a larger body than most beers of similar gravity. More creamy and chocolaty than overtly coffee-infused, this is not a strictly one-per-session beer. – Learn More 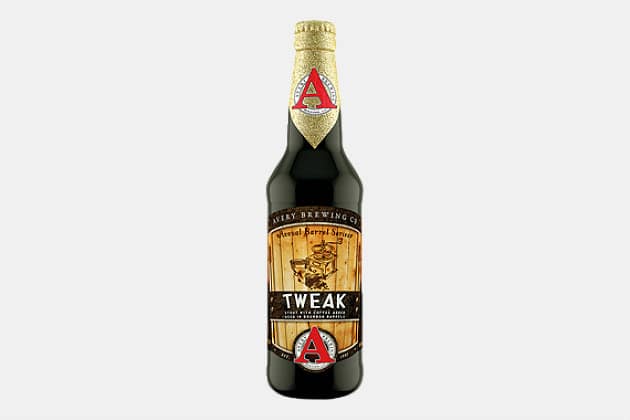 The geniuses at Boulder, Colorado’s Avery Brewing Company can hit a home run in any style of beer, and coffee stout is no exception. Tweak is a big, syrupy, super-high-ABV (16%) beer with motor oil mouthfeel and tremendous flavor profile. This is not a beer for the faint of heart. Most reminiscent of Thai coffee with the silkiness of condensed milk, it was an immediate success story when it hit shelves nearly a decade ago. Don’t shy away from its 16% ABV; it won’t burn like some of the lesser high-octane brews out there. – Learn More 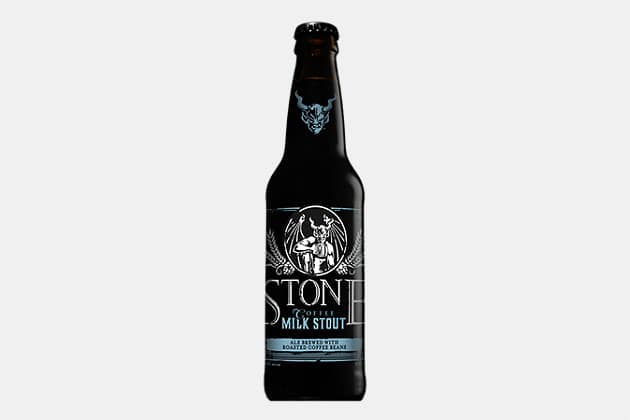 Even though it’s brewed with the softer lactose sugar (as are all milk stouts), Stone’s Milk Stout still retains the lovely, distinctly bitter essence of coffee. Heavy notes of chocolate malt are immediately present with a sharp stroke of bitter, dark chocolate at the finish. For a dark beer, it’s relatively easy drinking – though it’s a bit on the bitter side, as is customary from Stone. – Learn More 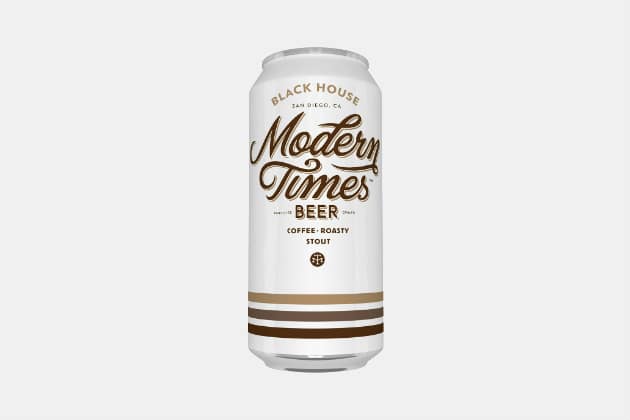 Straight from the source, right to your dilated pupils. Not only does Modern Times brew some San Diego’s finest beer, it also roasts and sells some of its finest coffee beans, which garner a massive 94 points from the people at CoffeeReview.com. Black House’s abundant coffee nose and unmistakable chocolate and English malt finish make it a fan favorite. It boasts crisp carbonation, a nice deep hue and a charming caramel head. – Learn More 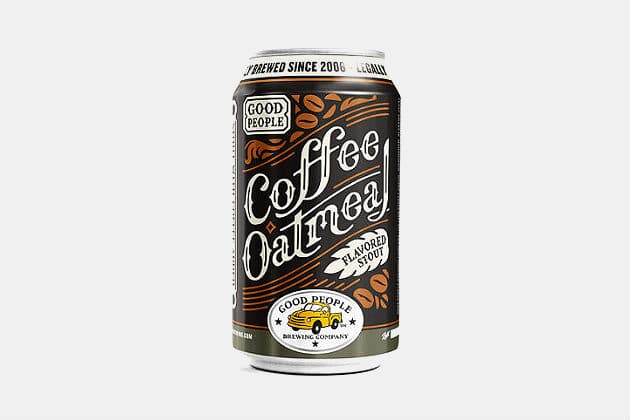 Unlike many coffee beers, the inherent bitterness of Good People’s Coffee Oatmeal Stout is more middle-bodied than at the back end, allowing its subtle coffee taste to last until the next sip. Also unlike some other coffee beers, its prominent coffee aroma isn’t betrayed by a lackluster body. It’s one of those niche-style beers that is confident in its personality without being overstated. Pound for pound, it’s likely the best of the bunch on this list. – Learn More 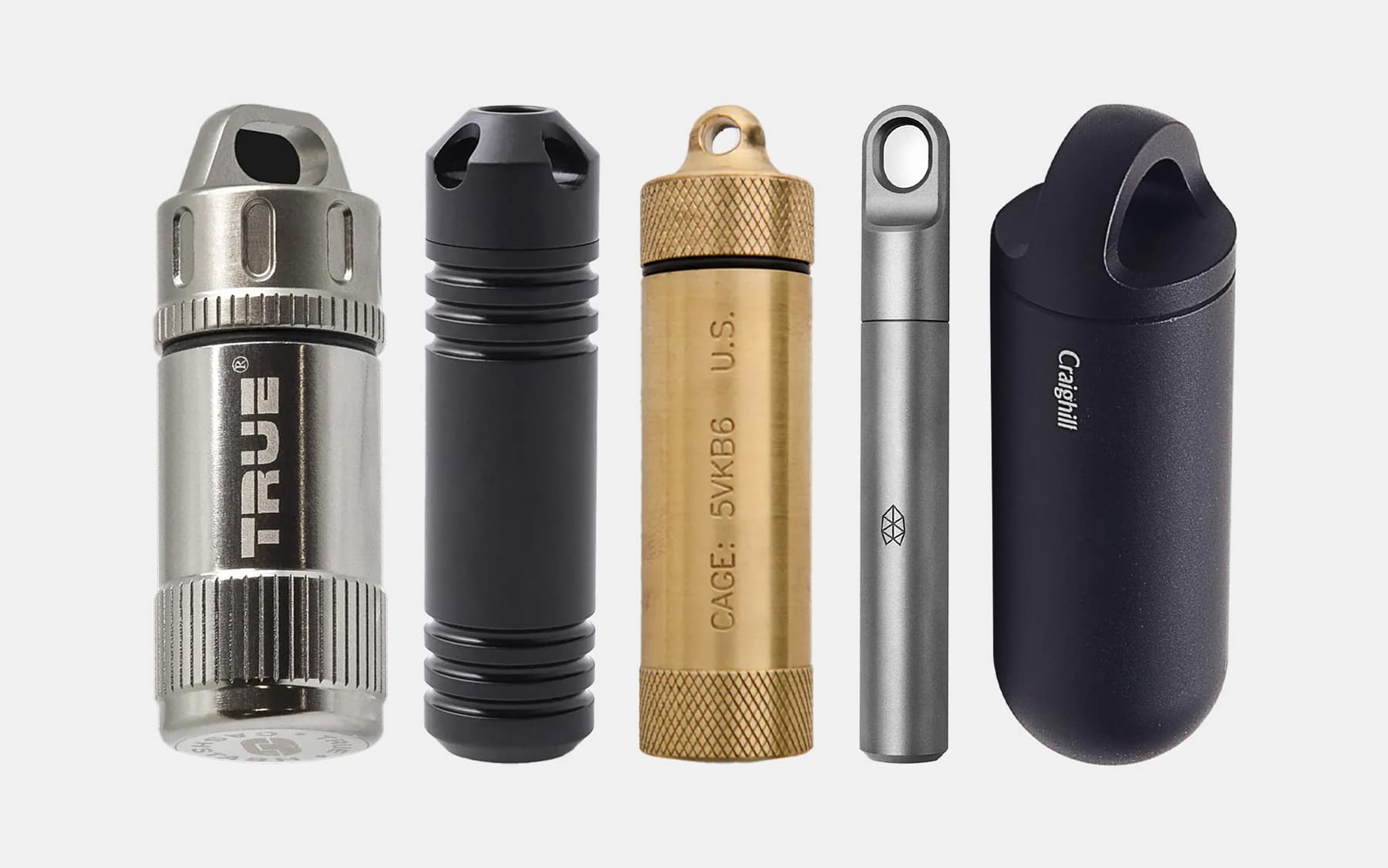 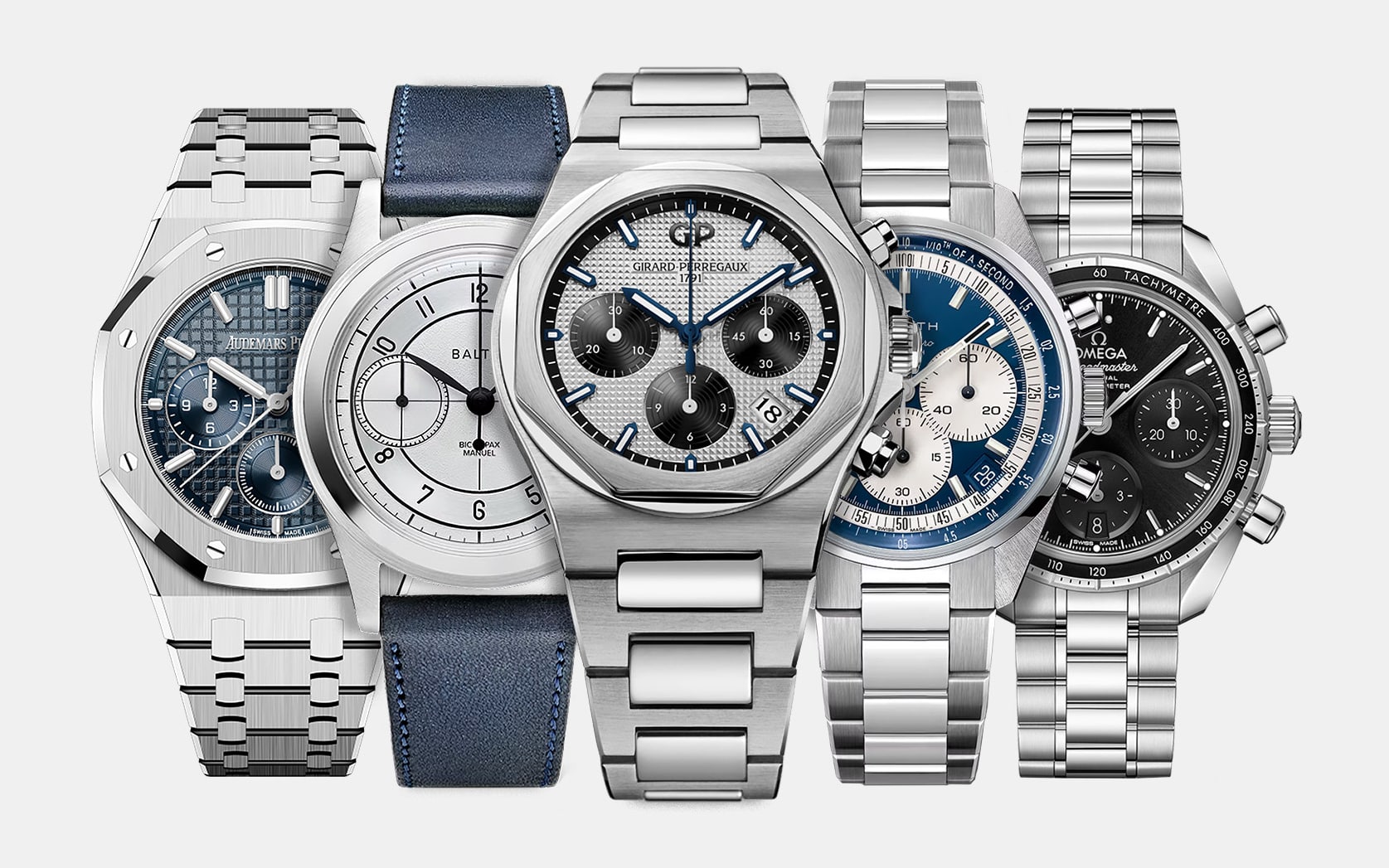