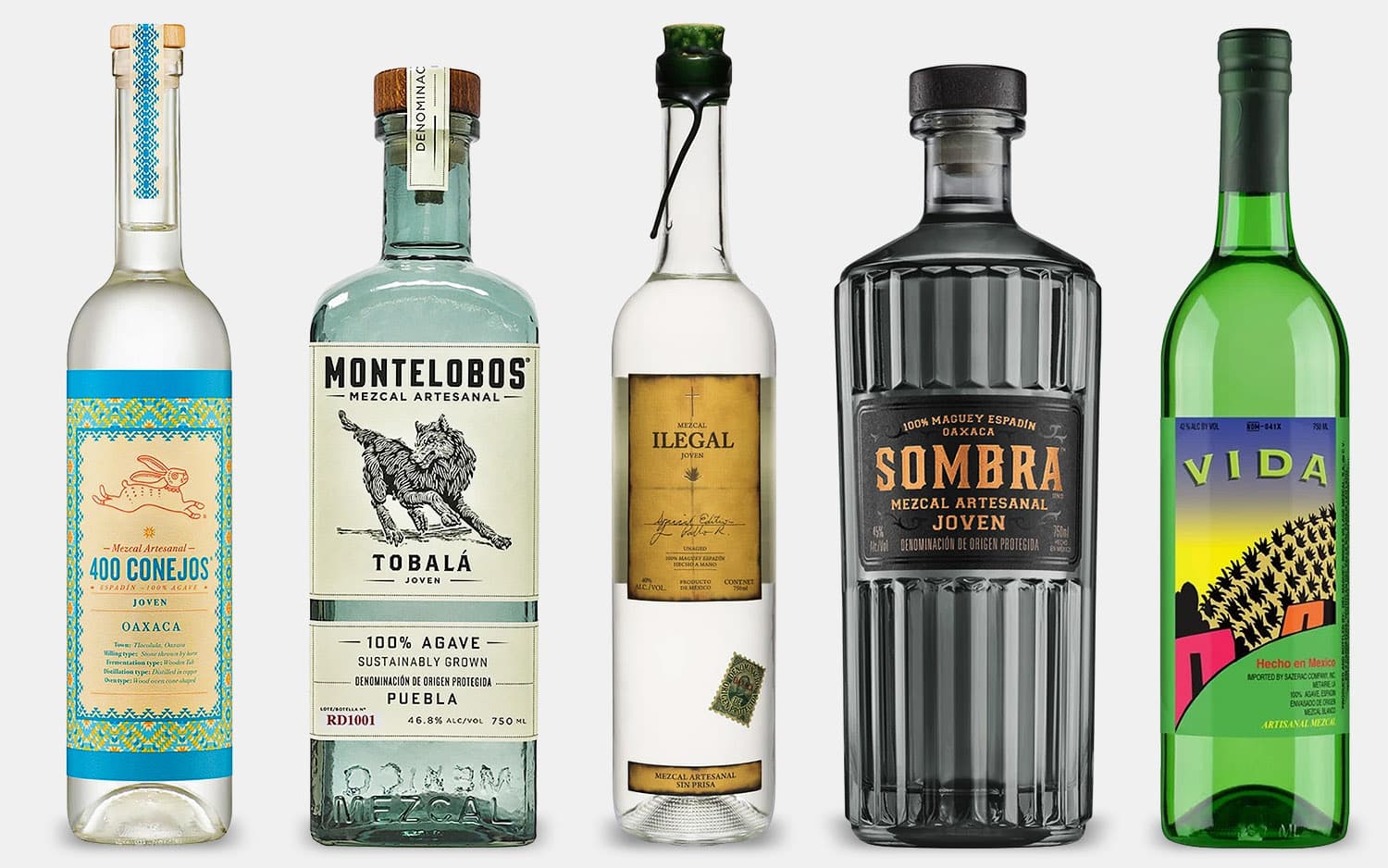 While not every version of Mexico’s most-imbibed spirit is imbued with smoky flavors, the most heavily smoked mezcals garner the most diehard fans. There’s a whiff of danger, there—and a seductively rich scent that can vary from burning herbs, to natural woodfire, to barbecued meats.

I fell in love with mezcal after a six-month trip to its homeland in Oaxaca, Mexico. And though the U.S. has only a fraction of the bottles and brands available down south, the best smoky mezcals that we do have are truly remarkable. With that, I’d like to share my 15 favorite mezcals, each dosed heavily with natural smoke flavors.

Made from eight-year-old agaves harvested in the Oaxacan highlands, Mezcal Amarás has a distinctly smoky character that is mellowed by high citrus notes, salt, and a finish of cinnamon. Because of the brand’s heavy focus on terroir, you’ll notice deep mineral flavors alongside a sweet mesquite and toasted marshmallow smoke. Though not as heavily smoked as some of the other mezcales on this list, it has an intoxicating note of roasted vanilla that lends a creamy sweetness to an otherwise aggressive spirit. Overall, I find it to be an excellent introduction to the smokier side of mezcal.

Chances are good that if you’ve been introduced to mezcal through cocktails, it was with Del Maguey’s Mezcal Vida. The company was one of the first to bring Mexico’s smoky spirit to the United States market, and they’re still a constant mainstay of cocktail bars across the country. Vida is Del Maguey’s introductory-level mezcal—and it’s filled to the brim with a smoke that’s reminiscent of burning rubber and gasoline. Sound intense? That’s because it is. And unsurprisingly, Vida is an intensely love-it-or-hate it spirit even for agave aficionados. If you’ve never had it straight, brace yourself for an eye-opening and hair-raising experience.

Though its name translates to “Army of the Dead,” Pelotón De La Muerte Mezcal is anything but fearsome. In fact, it’s the first mezcal that I recommend to people who are looking for a smokier spirit—smooth and affordable, with a distinctly smoky characteristic that trends towards barbecued meats and roasted herbs. Delicious on its own or in a cocktail, Peloton De La Muerte is a premier choice spirit for making Mezcal Margaritas. For a special experience, drink it in the traditional Oaxacan manner: Served neat in a small glass, accompanied by a slice of orange dusted in sal de chapulin, a Mexican fried grasshopper salt.

Sombra Mezcal has been a favorite of mine ever since I saw their first lewd-comic-laden labels. In fact, that’s where the name comes from: Sombra translates as “shadow,” and the original label was a collage of blacked-out pornographic comics. And while the label has changed a number of times, the refined smoke and clean citrus finish has remained true through every design change. It’s especially good for cocktails, where the fruit-driven palate pairs nicely with just about everything.

Crossing the boundary between approachable aromas and a punchy alcoholic finish, Mezcal 400 Conejos is a bit of an enigma. Mezcal purists may turn their nose up at the fiery end notes, but bourbon and rye fans will find a lot to love in the warming spicy flavors. Scotch fans will find plenty to enjoy as well, with a hint of honey and floral sweetness behind the veil of earthen smoke. It doesn’t hurt that the bottle is incredibly affordable as well, offering a lovely bridge from lightly smoked mezcals to more aggressive and assertive spirits.

Hailing from San Juan Del Rio, the “mezcal of lost souls” toes the line between sweet and savory while emphasizing smoky flavors the whole way through. And amongst purveyors of the environmentally-threatened mezcal agaves, Pierde Almas is one of the few that is actively contributing to reforesting their crops. So for each bottle of La Puritita Verda that’s sold, a portion of the profits goes to ensuring that you and I continue to have delicious mezcal to drink well into the future. As for the flavor, Pierde Almas pulls off a hat trick by making a mezcal that is simultaneously deeply flavored with a tiny alcohol burn—perfect for sipping after dinner.

The story of mezcal begins with Cafe No Se, a bar in Antigua, Guatemala. The owner was so taken with the as-yet-unnamed spirit that he took to smuggling it into the country in his truck, just to share with his closest friends and best customers. This led to a successful business relationship, and thus the name was born. Since the agaves for Ilegal are cooked over mesquite and eucalyptus wood, the smoke flavor trends somewhere between barbecued pork and resinous heat—better mixed into cocktails than sipped on its own.

Lemon zest, black pepper, and mango aromas meld with a sweet smoke to give life to Creyente’s Mezcal Joven. Made from two separate distillates—one from Tlacolula and one from Yautepec—that are then blended together, it’s a surprisingly smooth and viscous mezcal. You’ll notice an oily and velvety body that’s still quite approachable. No surprise, given that Creyente is made by tequila giant Jose Cuervo. Overall, it’s a nicely layered mezcal that will offend few and be a favorite of many.

The wonderfully smoky Wahaka Mezcal comes to us courtesy of the town of San Dionisio Ocotepec—a region home to just under 6,000 people, almost all of whom are of indigenous ancestry. Alberto “Beto” Morales is the master mezcalero behind the spirit and the designer of its beautiful blend of smoke, earth, and sweetness. So how did this special spirit make its way out of a rural southern Mexico village? It’s all thanks to a group of friends from Mexico City who set out to find the best mezcal in all of Mexico, share it with the world, and return the profits to the village where it originated.

Rey Campero, the “King of the Countryside,” abounds with aromas you’d find in Mexico’s southern highlands. A grassy intro is quickly supported by mesquite smoke, before transitioning to a rich tropical fruit center. On the tongue, the oily and viscous spirit doubles down on the smoke and fruit, then finishes with a honeyed sweetness. But the real magic happens after you swallow the first sip, as Rey Campero lights up with white pepper, clay, and more smoke as you exhale. Truly an exceptional mezcal for the price.

Made primarily from espadin agaves and then given added complexity by the addition of barril agaves, Banhez’s Mezcal Joven is continually surprising. The rich tropical fruit nose would lead you to believe that it’s going to be a smooth and easy sipper—but as soon as the liquor hits your tongue, it tells a completely different story. Flavors of mango and papaya are quickly overtaken by smoke, spice, and earth, transforming the experience into an intense journey to Mexico’s varied terroir. And thanks to this combination of tropical fruit aromas and deep flavors, it’s both a joy to sip neat and to mix into cocktails.

The Mezcales de Leyenda lineup of spirits is truly impressive, both in its scope and in how committed the company is to giving back to Mexico’s artisanal communities. In the case of the Guerrero bottling, the spirit is product of four generations of mezcaleros, now headed by Don Oscar Obregón. Made from wild cupreata agaves, it’s unlike any other mezcal in this list. Funky, briny, and with a refined smoke, it will carry you through dozens of savory flavor and aroma notes before landing on an orange-tinged finish. Once you try the Guerrero, it’s definitely worth sampling each other region of Mezcales de Leyenda’s spirits.

Look at any list of reviews, and you’ll see that mezcal aficionados find little to agree on about their favorite spirits. That makes Del Maguey’s Chichicapa mezcal particularly special, because everyone from first-time tasters to long-time drinkers love it for its smooth, subtle, and complex character. Though it has a relatively light and citrus-focused nose, the smooth and creamy mouthfeel gives way to increasingly developing layers of smoke, tropical fruit, and minerals. Each sip seems to take you deeper into the heart of the agave, revealing more and more of what makes mezcal a genuinely unique drinking experience.

Santo Cuviso falls into a unique category of mezcals officially known as bacanora, named after the region where its agaves originate. Until 1992, the production of bacanora was banned—but bootleggers continued distilling it decade after decade. As a result, the spirit has taken on a distinct style that leans into herbal flavors and intensely smoky finishes. Santo Cuviso is a perfect example of this, with prominent aromas and flavors of mint and licorice and a deep, dark, smoky finish. Look also for the sotol made by the same brand.

Espadin, the most common agave used to make mezcal, grows for 8 to 10 years before being harvested. Tobala agaves stay in the ground for at least 15, developing an even more interesting and complex character once they’re harvested and roasted. Montelobos Tobalá exemplifies this style, with a heady aroma of lemon, fresh green chiles, and juicy pear. On the palate, it explodes into a medley of citrus fruits, herbs, figs, and savory smoke. A warm buttery finish wraps up this special drinking experience, inviting you back to sample again and again.