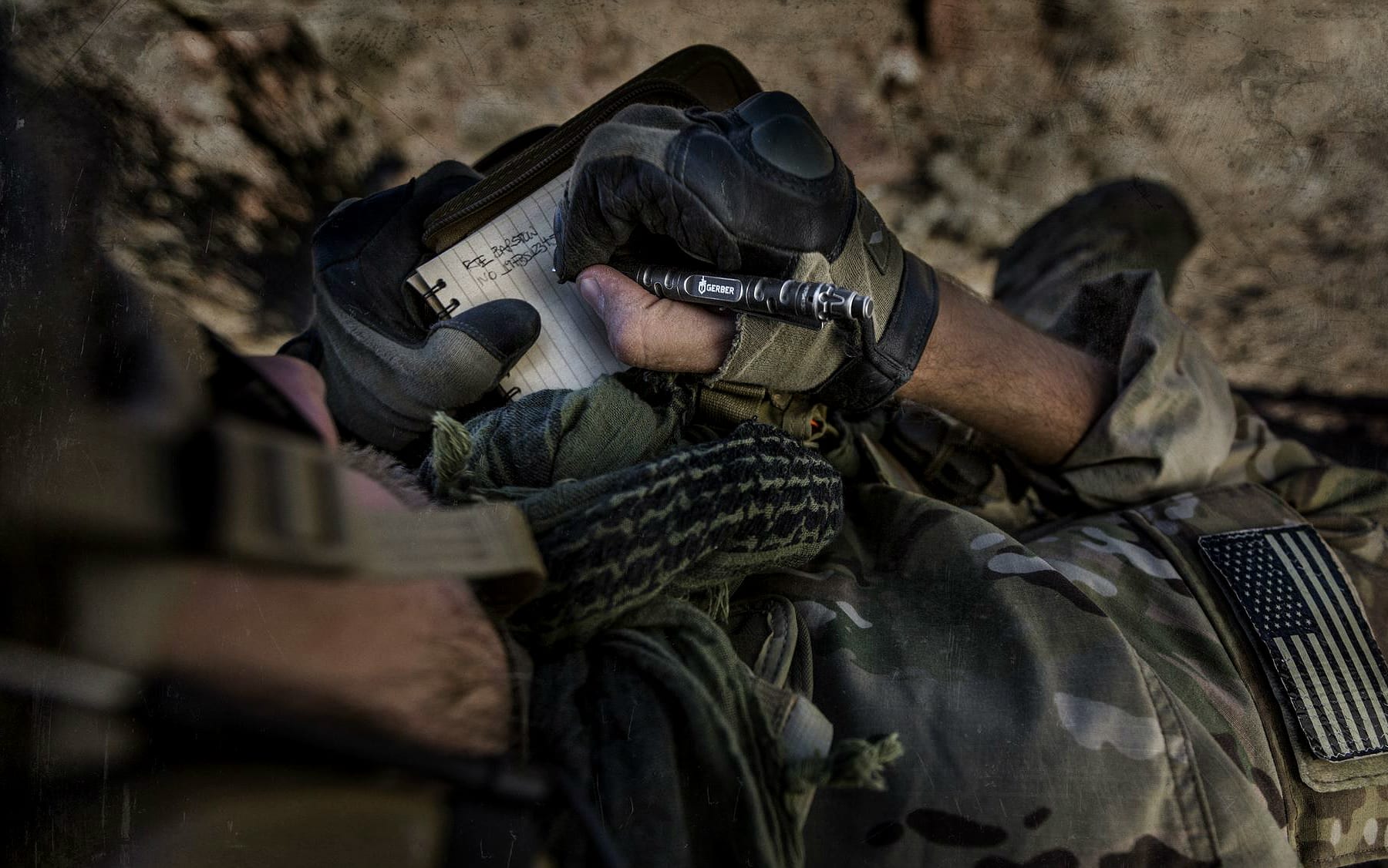 A tactical pen, much like a tactical knife or an EDC Pen, is an often overlooked piece of everyday carry gear that could very well save your life one day, or at the very least provide you with the means to jot down your ideas or notes. Tactical pens typically feature a heavy duty machined metal construction, are outfitted with pressurized ink cartridges, and fit easily in your pocket, shirt, or on your belt with your other tactical gear.

While fending off an attacker with a tactical pen is neither preferred nor realistic in most situations, should you drop your firearm or run out of bullets, they can and will pull double duty as a self defense weapon in a pinch if you’re both trained in doing so and carrying it on your person when the time comes to need it. After all, nothing stops an intruder dead in his tracks quite like being impaled by a chunk of titanium, steel, or aluminum. For those looking to expand their carrying options, here is our list of the twenty best tactical pens on the market today, in no particular order. 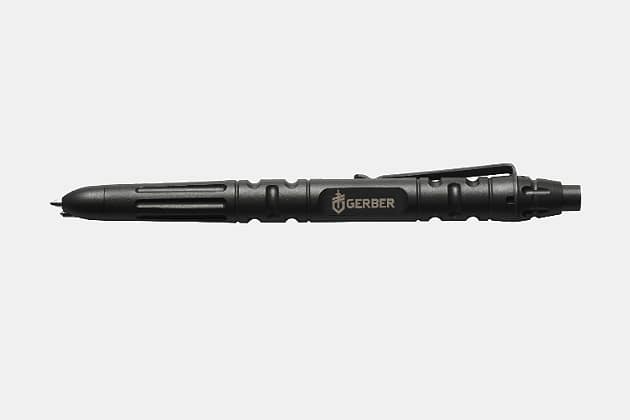 Designed from law enforcement official input, Gerber’s Impromptu Tactical Pen is truly tactical in appearance and performance. It features a simple push button mechanism that reveals an ink cartridge that can write in all positions and in wet or dry weather, a tempered steel tip window punch, and a machined steel construction that renders it heavy and sturdy enough to effectively double as a self defense weapon. This is currently our tactical pen of choice, which we carry daily with no problems. – Buy Now 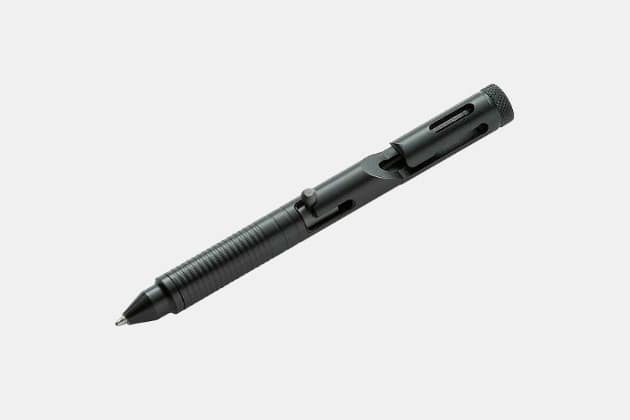 If you’re stuck in the office 12 hours a day, 5 days a week, then the Bolt Action Tactical Pen may provide some mild entertainment for you while you sift through endless TPS reports and sit through pointless staff meetings. This hardcoat-anodized, aluminum-body tactical pen from German knife maker Böker features bolt action mechanics for a satisfying open and close. The integrated clip makes for a smooth draw from your pocket while the flat, notched-grip head offers no-slip thumb placement for tactical use. – Buy Now 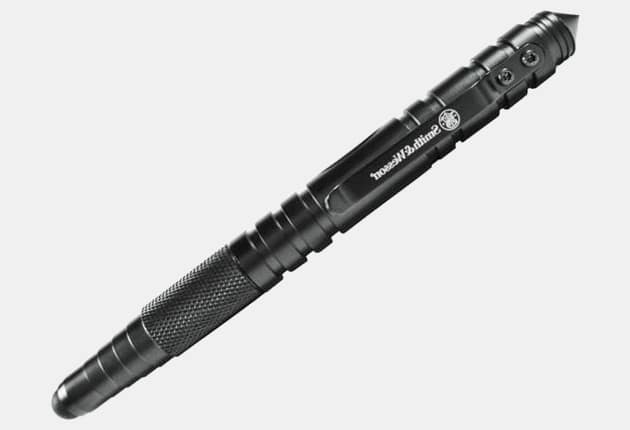 The Smith and Wesson Tactical Pen is a perfect choice for those who rely heavily on a smartphone or tablet during the day because of its screw cap protected built-in stylus. The tactical properties of the pen is its machined 6061 hard anodized aluminum construction, black pocket clip, personal protection tip, and ball point black ink cartridge. – Buy Now 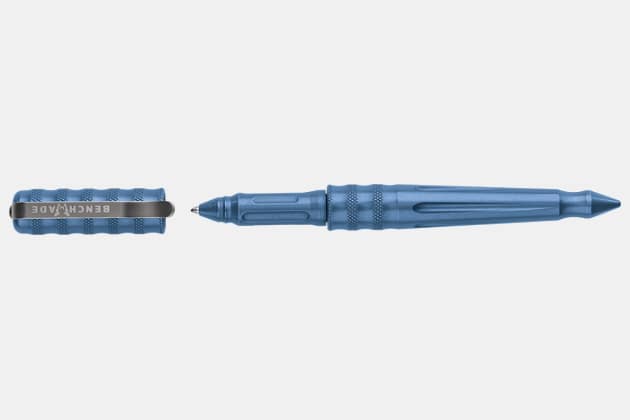 Benchmade crafts some of the world’s best fixed blade knives and pocket folding knives, but few are aware of their collection of tactical pens. Our favorite by the brand is the 1100 Series Pen, a lightweight, titanium-built writing instrument that will stand up to as much daily abuse as it’s folding knife counterparts while providing the same last ditch effort self defense duties as pretty much any other pen on this list. – Buy Now 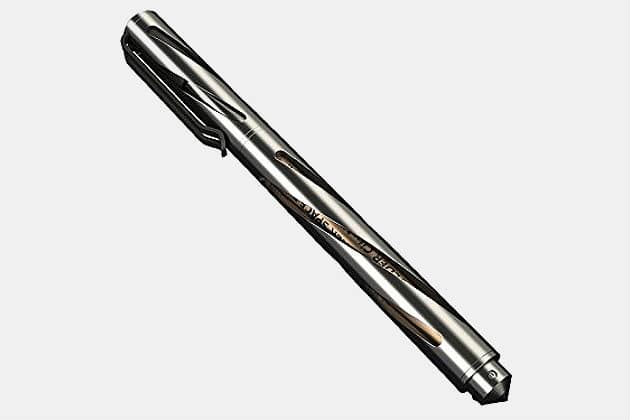 We’re big fans of Nitecore’s EDC flashlights, and the brand’s NTP10 Tactical Pen appears to be just as functional. The pen is both lightweight and incredible durable thanks to a waterproof titanium construction that won’t rust, won’t stain, and will probably never break no matter how much abuse you try to throw at it.

The best part is how well the pen actually operates. It can write on any surface in most any weather conditions, and can even write in space — should you happen to be on the next space flight to Mars sometime this century, be sure and throw it in your pocket or pack it in your bag of choice. Additional features include a window-breaking tungsten steel tip and a deep carry pocket clip. – Buy Now 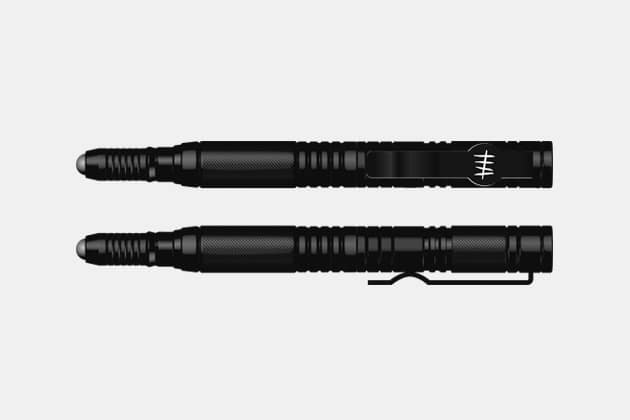 Hardcore Hardware’s primary mission is to create highly functional, mission-ready tactical gear for the military, law enforcement and other public safety personnel, and civilians who appreciate quality tools. Among their selection of folding knives, fixed blade knives, and tactical tomahawks is their line of tactical pens. Their flagship tactical pen, the TWI-02, is made from non-reflective black anodized aluminum and features knurling along the shaft for a better grip, a steel glass-breaking tip, a steel pocket clip, and Fisher Space pen ink refill compatibility. – Buy Now 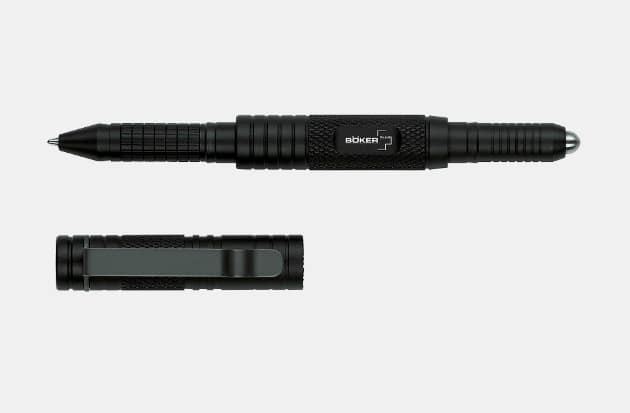 Boker Plus has joined the tactical pen movement with their very own Tactical Pen, a highly functional, lightweight aluminum version that is sure to compliment your everyday carry collection. It features a black anodized finish along with a checkered texture for a secure grip, and a stainless steel insert on the shaft end that doubles as a self defense kuboton. – Buy Now

One of our favorite tactical pens on the market, the Schrade Survival Tactical Pen features a lightweight anodized aluminum body, a built-in glass breaker, and whistle, a replaceable ink cartridge, and an incorporated fire Starter, rendering this tactical pen the choice for outdoor enthusiasts. – Buy Now 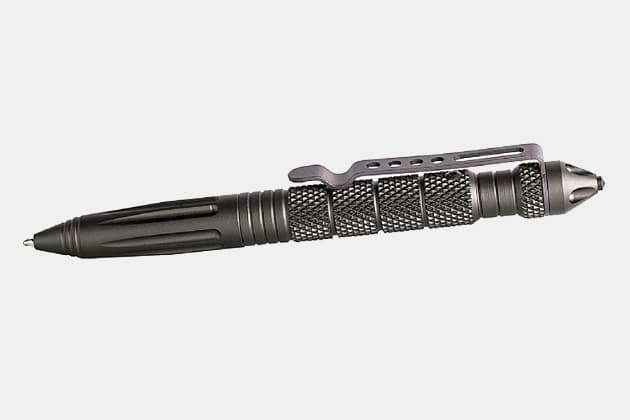 Don’t let it’s wallet-friendly price fool you. The field-tested, James Bond-worthy UZI Defender Tactical Pen has seen it’s fair share of duty by the special forces elite and secret service to name a few, and features an aircraft aluminum construction, an integrated glass breaker, and a hidden handcuff key should you need to escape from the clutches of your enemies. – Buy Now 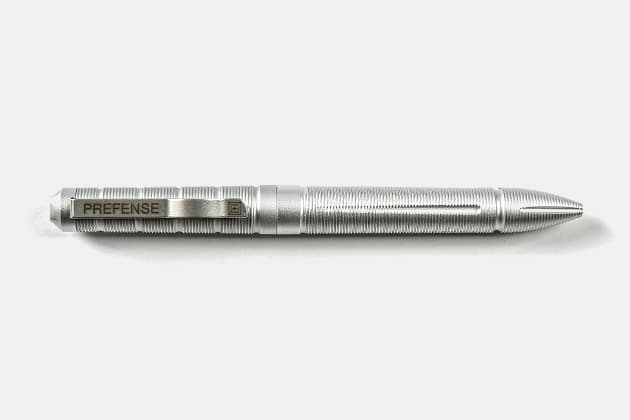 Depending on who you ask, the word tactical relates more to functionality than appearance. This is truly evident with the 5.11 PreFense Lance Pen — the latest addition to the brand’s Tarani PreFense tactical self defense tools. It’s anodized aluminum body appears no different than any other everyday carry pen and offers up a textured shaft for a superior grip, perfectly-balanced engineering for extended writing tasks, a spring steel pocket clip, and a flattened top that acts as a thumb stop when utilizing the pen as a weapon. The PreFense Lance Pen is the perfect choice for those looking for plenty of functionality in a subtle design that doesn’t scream tactical. – Buy Now 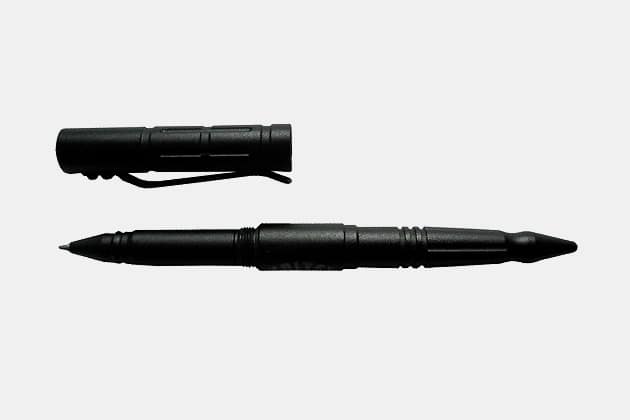 The best thing going for the Valtev Tactical Pen, besides it’s compatibility with both Parker and Fisher Space Pen ink cartridges, is it’s wallet-friendly price tag. At only fifteen dollars and some change, keeping several of them around for backups won’t break the bank. Despite the low cost, the Valtev Tactical Pen is built to perform thanks to a rugged aircraft aluminum construction that renders it both lightweight and capable of fending off an unarmed attacker if used properly. – Buy Now 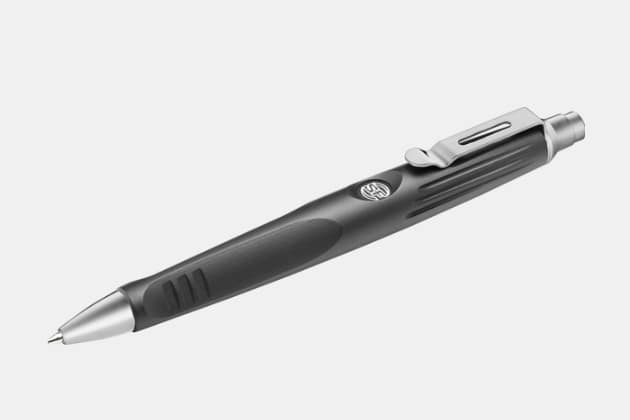 The SureFire Pen IV is the Mercedes-Benz of tactical pens. It is precision machined from high-strength aerospace aluminum with a hard anodized Mil-Spec black finish. the accompanying hardware on the Surefire Tactical Pen is stainless steel, including the pocket clip, nose cone, and durable retractable click button. Along with a stellar design, it utilizes and imported Schmidt easyFLOW 900 ballpoint pen cartridge for effortless writing all day. – Buy Now 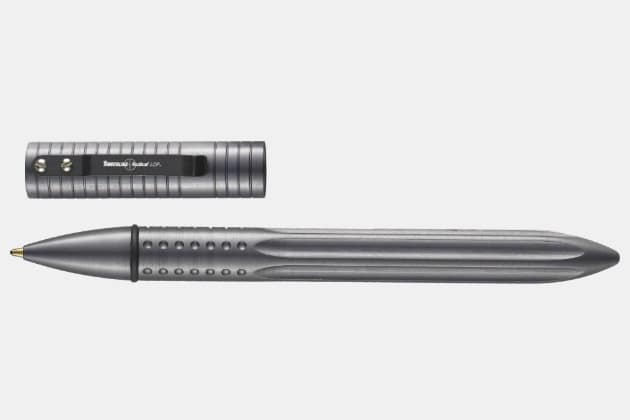 Knife designer Greg Lightfoot designed the Timberline 700 Lightfoot LCP Combat Pen to be as aesthetically pleasing as it is tactically functional. Its the tactical pen of choice for police and military personnel because of its rugged, lightweight aircraft aluminum construction, fluted barrel, ported muzzle, and reliable performance. – Buy Now 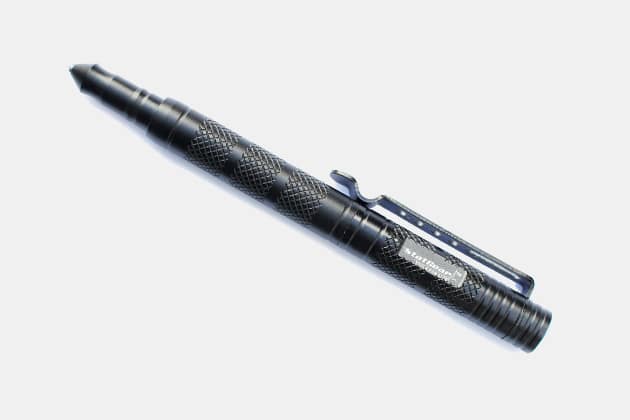 This tactical pen by StatGear is made from aircraft-grade aluminum and features a carbide tip glass breaker and a Fisher Space Pen pressurized ink cartridge that can write in the rain, upside down, and in temperatures between -30 and 250 degrees fahrenheit. – Buy It 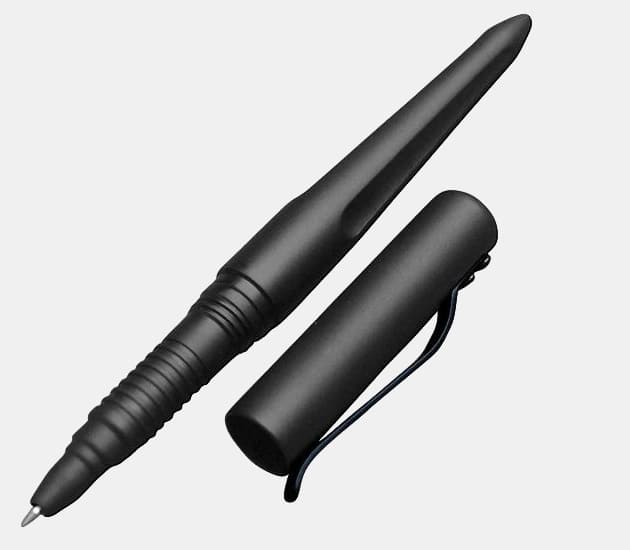 The Mil-Tac Tactical Defense Pen was designed specifically for military and law enforcement personnel, but is available to anyone looking for a multifunctional pen to meet their everyday carry needs. Crafted from rugged aircraft grade aluminum with a stainless steel pocket clip, the Mil-tac Tactical Pen is pointed on one end and blunt on the other, both meant to perform self defense duties, and can also be used as a stylus. – Buy Now 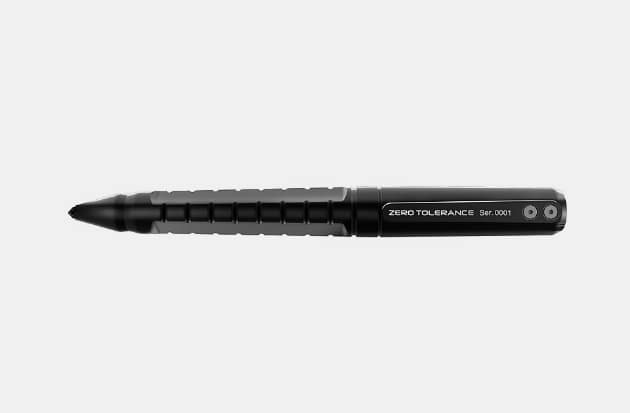 Most tactical pens feature some type of steel, aluminum, or alloy construction. To call some of them tactical is a stretch of the imagination. There are some, however, that are truly worthy of everyday carry. The Zero Tolerance 0010TI Titanium Tactical Pen is one of them.

The 0010TI, much like any Zero Tolerance knife on the market, is built like a tank and features a machined titanium construction with an integrated glass breaker tip for both breaking glass during life saving rescue attempts and for self defense maneuvers should it be your only weapon available. As reliable as titanium is for any tactical tool, where the 0010TI really shines is its ability to write—whenever and wherever—thanks to a Rite in the Rain ink cartridge that works in the rain, cold, heat, or in upside down position. – Buy Now 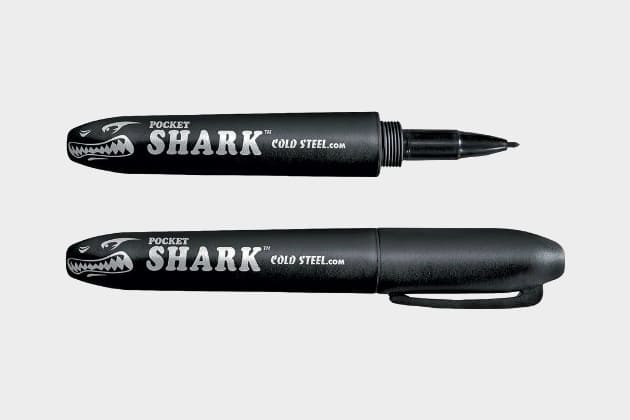 Not quite a pen by normal standards, the Cold Steel Pocket Shark is tactical nonetheless. Its a permanent marker with a black grivory construction and walls that are four times thicker than typical markers, giving it a greater impact in self defense situations as well as the tactical charm we’re looking for in a pen. – Buy Now 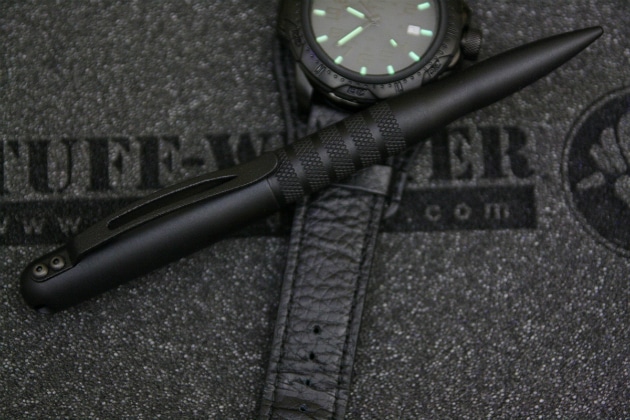 The Tuff Writer Operator Series Tactical Pen is one tough pen. It was built to operate within a temperature of -30 to 250 degrees Fahrenheit, and thanks to increase wall thickness, can withstand approximately 750 PSI of pressure before it begins to deform. Additional features include a sharp, rounded end that serves as a stylus or self defense weapon, a low slip grip, powder coated clip, and a non-reflective, non-marking surface treatment. – Buy Now 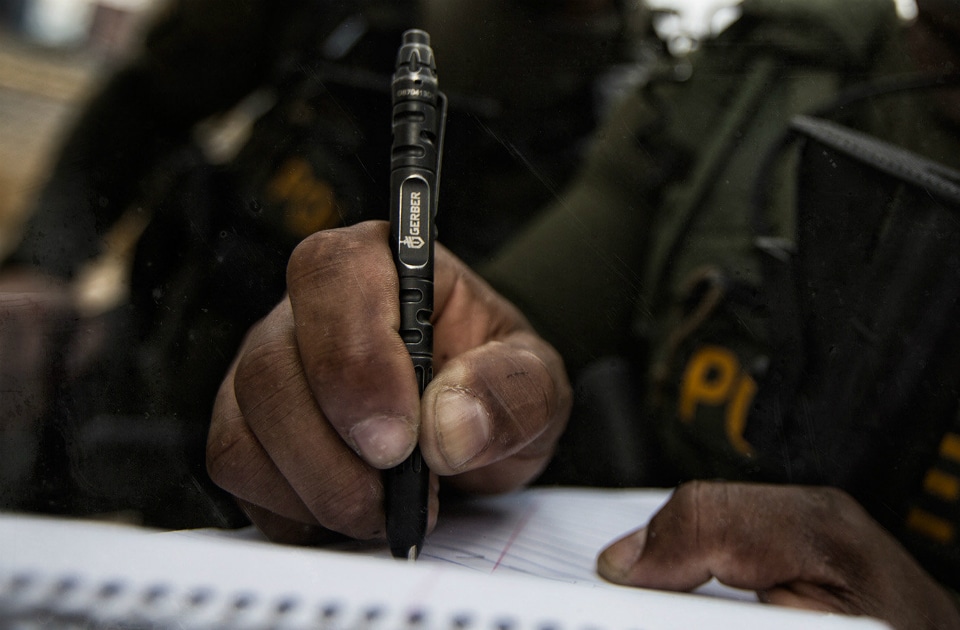 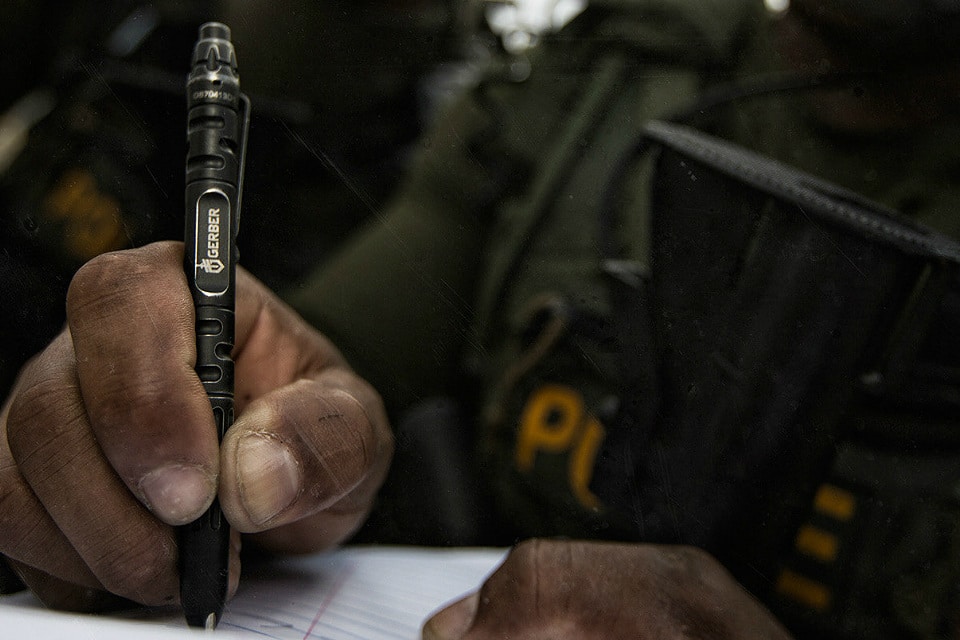 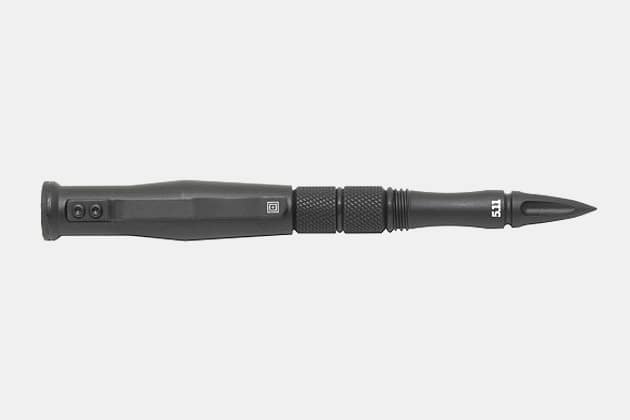 While the 5.11 Double Duty Tactical 1.5 Pen doesn’t open handcuffs or feature an integrated flashlight or other tools, it makes for a pretty capable last ditch effort self defense weapon should you drop your knife or run out of bullets. The Double Duty 1.5 tactical pen features a machined aerospace grade aluminum construction with a matte black finish, a knurled grip for better handling while taking notes, and a sharp, pointed end for impaling your would-be attacker. – Buy Now 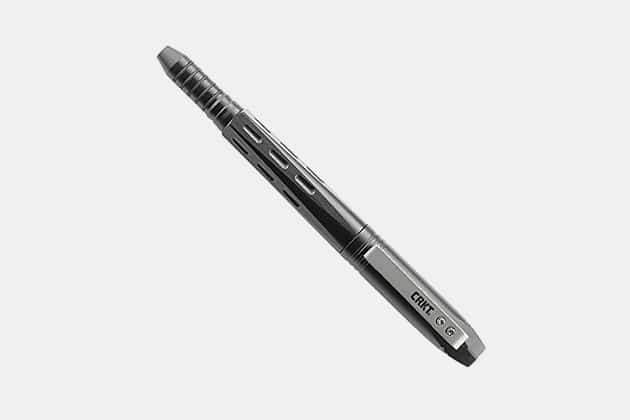 The Tao Tactical Pen by Columbia River Knives and Tools was designed primarily for self defense in mind. Crafted from precision machined aluminum, its impact crown on the cap, the pen itself, and a pointed butt on the opposite end were all meant to ward off would-be attackers, while a NASA developed Fisher Space Pen tungsten carbide ball point and thixotropic ink cartridge function at any angle, in freezing temperatures, boiling heat, and even underwater—ensuring it operates just as well as an everyday writing instrument as it does a tactical weapon. – Buy Now 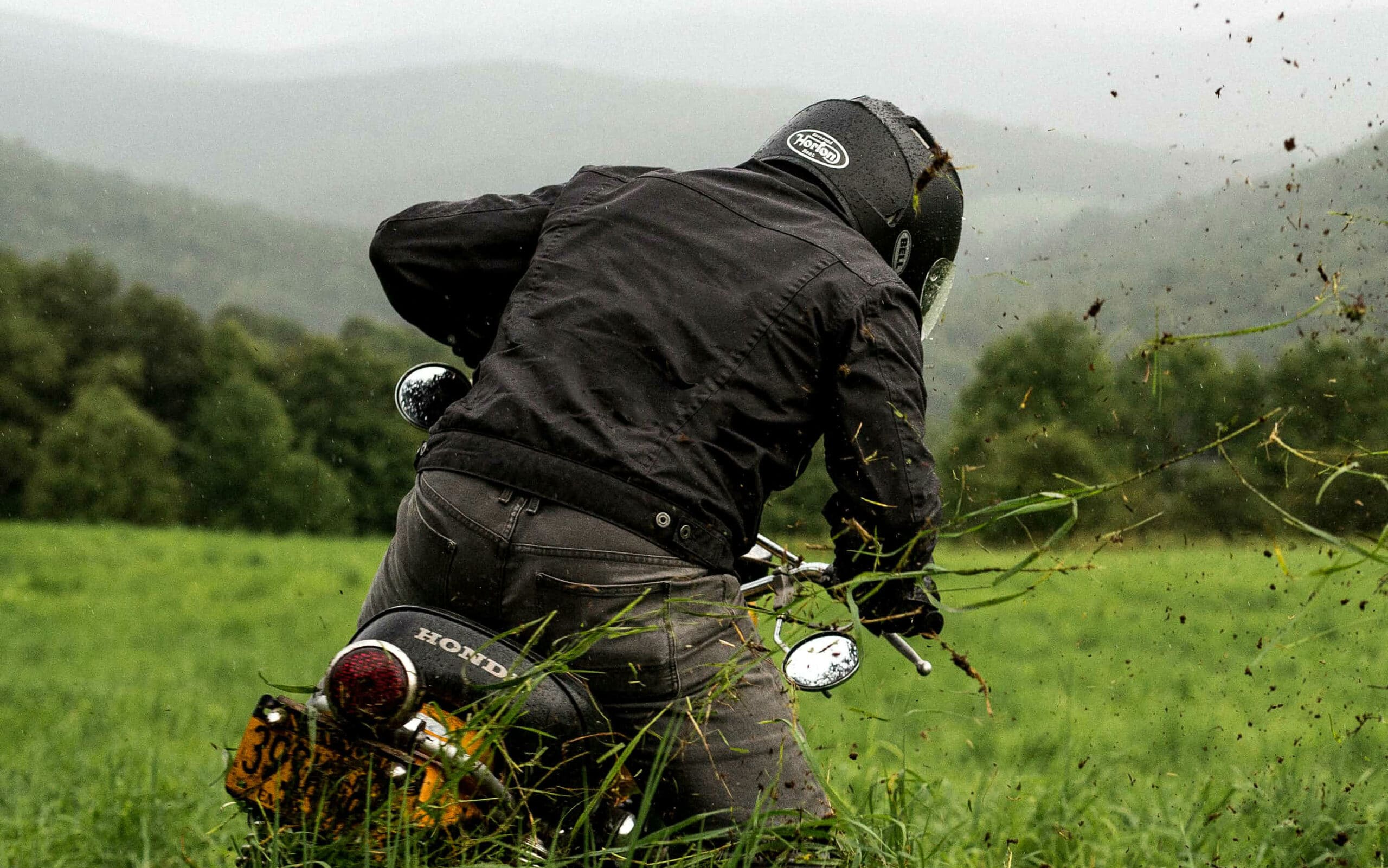 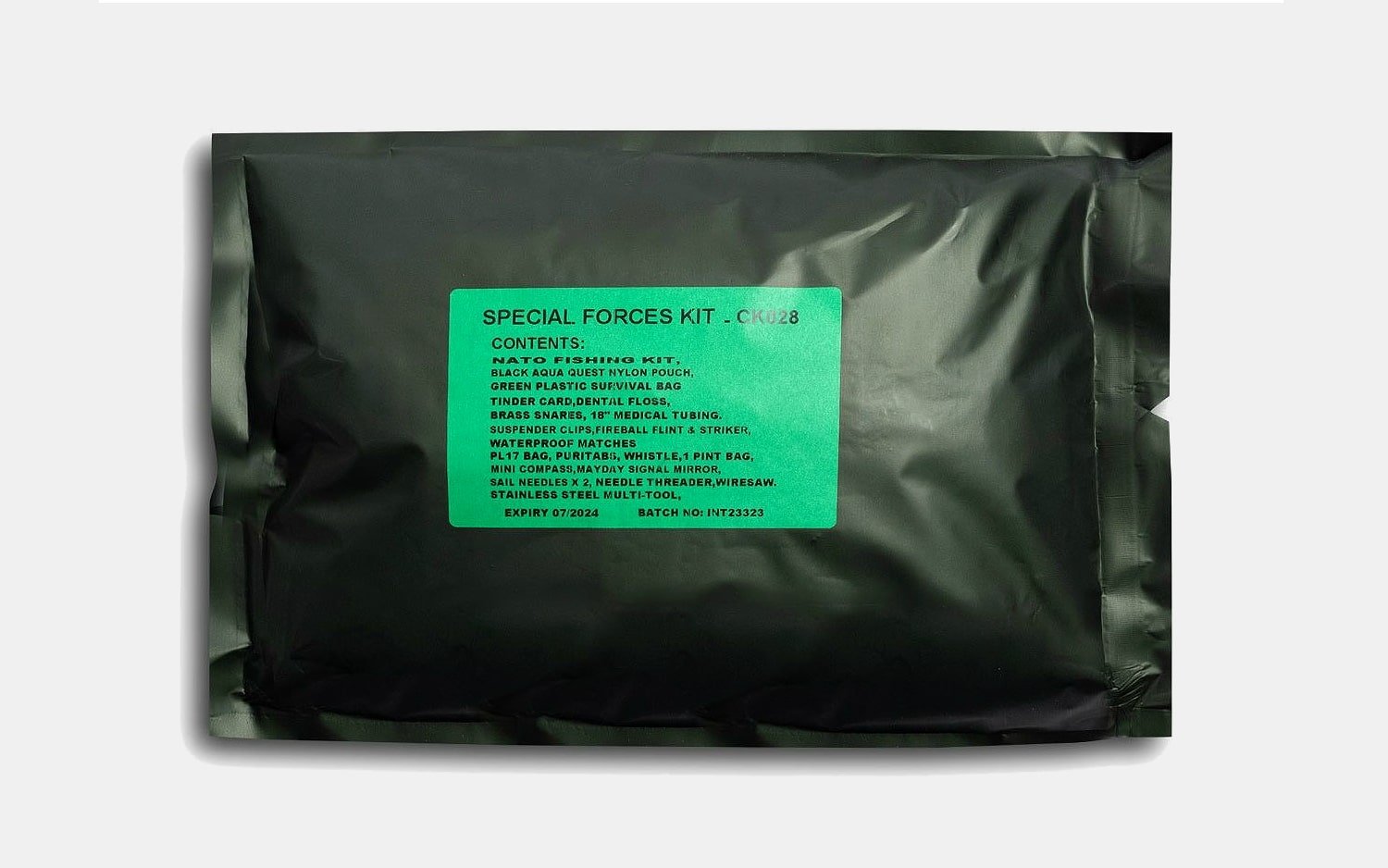